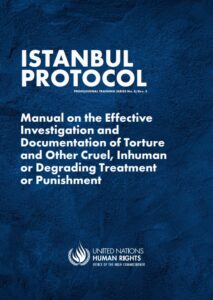 The Office of the United Nations High Commissioner for Human Rights (OHCHR) has published the 2022 edition of the Istanbul Protocol: Manual on the Effective Investigation and Documentation of Torture and Other Cruel, Inhuman or Degrading Treatment or Punishment with contributions from more than 180 anti-torture experts from 51 countries.

Since the first edition of the Istanbul Protocol in 1999, in which IFHHRO was one of the participating organizations, the protocol has become the international standard of investigating and documenting torture.

Many thousands of training and implementation sessions have been held worldwide since 1999, which have also been sources of new knowledge and lessons learned.

IFHHRO’s Maartje Goudswaard and Adriaan van Es were members of the international revision team, and, with our international colleagues, we are proud and happy to publish the new revised 2022 edition of the Istanbul Protocol.