Earlier this week, Mental Health Europe and the University of Kent-Tizard Centre (UK) launched a report on their extensive study on the state of mental health services across Europe (more than 35 countries). This report, entitled Mapping and Understanding Exclusion. Institutional, coercive and community based services and practices across Europe is an expanded edition of Mental Health Europe’s 2012 Mapping Exclusion report.  The study provides exclusive data and testimonies about European mental health systems, ongoing human rights violations, and promising alternatives. 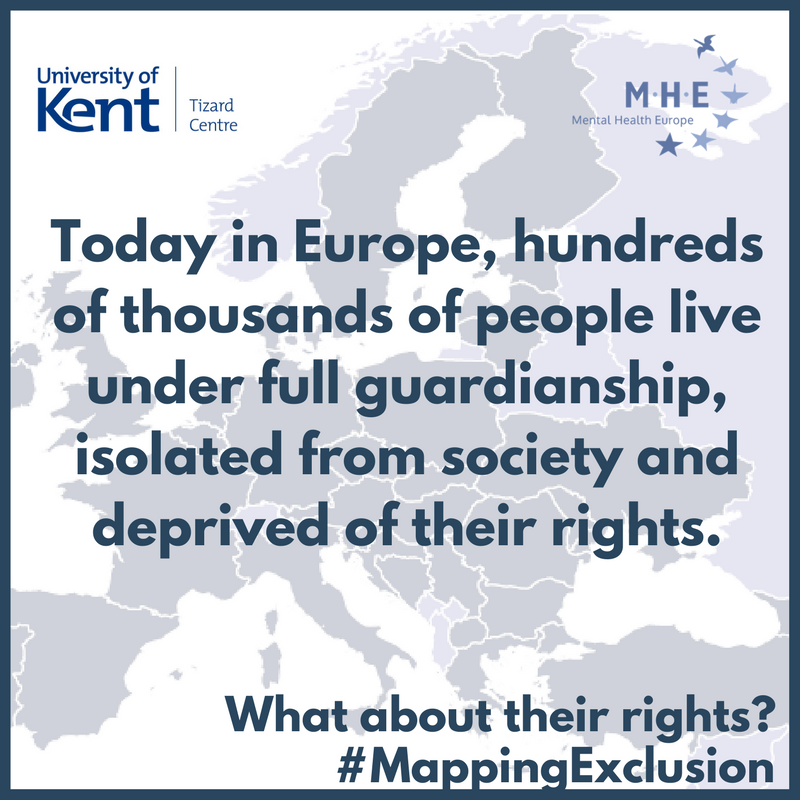 According to Mental Health Europe (MHE), tens of thousands of people with mental health problems are living in psychiatric and other institutions in Europe today. At least 264,000 people live under full guardianship, isolated from society and deprived of the right to make choices which make up our everyday lives. Nigel Henderson, MHE President, said: “Many of them are deprived of their most basic rights, have little control over their lives and face abuses such as excessive use of seclusion, restraint and forced treatment. Although there are some positive changes happening in some European countries, the findings of our report highlight some outdated and questionable practices in mental health systems across Europe.”

The report shows that institutional care, the use of coercion, forced medication, loss of rights and reliance on involuntary hospitalisation of people living with mental ill health are not only a Central and Eastern European problem: countries in Western Europe (including France, Belgium, Ireland, the Netherlands, Portugal, and Germany) still have mental health systems where treatment relies too much on confinement and where tens of thousands of people with mental health problems are still living in closed institutions.

“I believe it may have been harder for me to heal from the trauma of the hospitalisation rather than from the mental health issues themselves”, said Sabrina Palumbo, one of the people who was interviewed for the study.

Blurb from the Executive Summary

The report shows that while the situation described in 2012 has changed somewhat, there is still a substantial number of people with mental health problems living in institutions across Europe and in need of community-based services. Although reforms have taken place, the report shows that there are several barriers such as the poor cooperation between social and health authorities, lack of human rights compliant community-based services, trans-institutionalisation and austerity. Furthermore, in recent years deinstitutionalisation has been painted as a largely Central and Eastern European issue, however institutions exist in many Western countries as well, including France, Belgium, Ireland, the Netherlands, Portugal, and
Germany, where tens of thousands of people with mental health problems are still living and where little is being done about this situation. In Central and Eastern Europe, the implementation of EU-funded deinstitutionalisation programmes has been slow, and there are limited data about the actual outcomes of these programmes for people with mental health problems.

The personal testimonies which were graciously provided by people with lived experience of coercive measures and collected for this report show that involuntary placement and treatment can have long-term and devastating effects on people’s lives. Lack of information before and during admission, poor physical conditions, forced medication with severe side effects, the
absence of legal aid, physical and emotional harm, social and physical isolation, and stigma all featured in personal testimonies
of ex-users and survivors.

In the previous Mapping Exclusion report in 2012, several countries were planning or implementing progressive – and promising – legal capacity reforms. However, by 2017 our report found that only some countries have actually changed their relevant laws and practical implementation of supported decision-making remains wanting almost everywhere. Overall the
evidence collected in this report shows that the human rights issues facing people with mental health problems and psychosocial disabilities both within and outside of mental health services should still be of great concern.