Human Rights Watch is drawing attention to the link between waste management and the right to health. Using the example of Lebanon, the organization states that the open burning of waste is a dangerous and unreported part of this country’s waste management crisis. 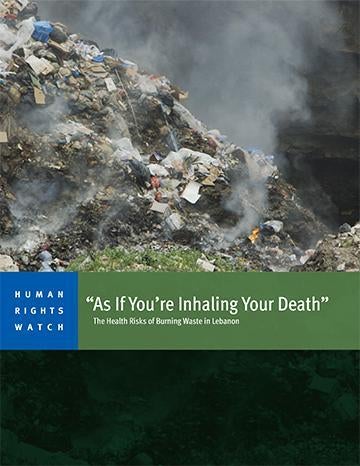 In December 2017, Human Rights Watch released the report  “As If You’re Inhaling Your Death” on the health risks of Lebanon’s waste management crisis. It found that the open burning of solid waste at more than 150 dumps across the country poses serious health risks to nearby residents and states that the authorities’ inaction to end this open burning of waste is violating their right to health.

Those living near dump sites which are burned reported an array of health problems consistent with frequent and sustained inhalation of smoke. Children and older people are at particular risk and these dumps are disproportionately located in lower-income areas.

On January 17th, researcher Bassam Khawaja wrote on the HRW website: “To get back on track, Lebanon needs to do more to fulfill its binding commitment to respect, protect and fulfil rights such as the right to health and education. This would encourage citizens to demand action from their government, require the government to guarantee a minimum level of protection, and introduce accountability for government failures.”

To put pressure on the Lebanese government, Human Rights Watch has recently started a letter-writing campaign.