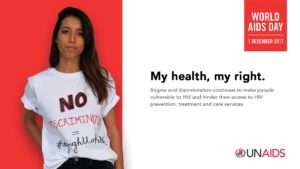 The people most affected by HIV are often the most marginalized in society, including sex workers, gay men and other men who have sex with men, people who inject drugs, prisoners, migrants, etc. They are also the most frequently denied their right to health.

People living with HIV are denied their right to health:

Go to the #myrighttohealth campaign